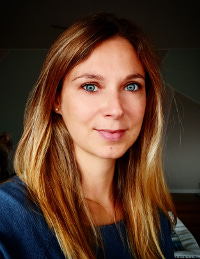 Giorgia Cona, PhD, is an assistant professor (Ricercatore di Tipo B) at the University of Padova, Department of General Psychology.

In 2012, she received the Young Researcher Award from the AIP (Associazione Italiana di Psicologia). In 2019, she won a grant from the University of Padua, the STARS Starting Grant, with a project titled: “Trade-offs in human Behaviour and Brain: a (r)Evolutionary approach” and a grant from the Italian Ministry of Health (Bando Ricerca Finalizzata) with a project focused on the Effectiveness of attention/executive functions training on prospective memory abilities of Parkinson’s disease with a combined immersive Virtual Reality and Telemedicine approach.

She teaches Neuropsychology of Aging, Human Electrophysiology and Non-Invasive Brain Stimulation techniques at University of Padua

She has authored more than 30 peer-reviewed articles in international scientific journals, 4 book chapters, organized various symposia and international workshops, and has been invited as a speaker in several national and international conferences and research institutes.

She is expert in EEG and TMS techniques; her research interests involve: