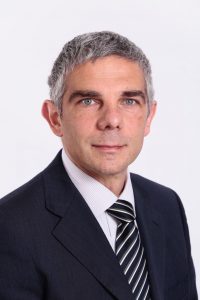 Emanuele Menegatti is Full Professor of the School of Engineering at Dept. of Information Engineering of University of Padova since 2017.

After his graduation in Physics in 1998, he received his MsC in AI & Robotics from the University of Edinburgh (UK) in 2000. Menegatti received his Ph.D. in Computer Science in 2003 from Univ. of Padua. In 2005 he became Assistant Professor and Associate Professor in 2010.

Menegatti’s main research interests are in the field of Robot Perception. In particular, he is working on neurorobotics, RGB-D people tracking for camera network, and service robotics.

He is teaching master courses on “Intelligent Robotics”, “Three-dimensional data processing” and bachelor course in “Computer Architecture” and a course for school teachers on “Educational Robotics”.

He was coordinator of the FP7 FoF-EU project “Thermobot” and local principal investigator for the European Projects “3DComplete”, “FibreMap” in FP7; “Focus”, “eCraft2Learn” and “SPIRIT” in H2020. Menegatti also served as Project Reviewer for the European Commission in FP7 and H2020.

In 2005, Menegatti founded IT+Robotics, a spin-off company of the Univ. of Padua, active in the field of industrial robot vision, machine vision for quality inspection, automatic off-line robot programming. In 2014, he founded EXiMotion a startup company active in the field of educational robotics and service robotics.